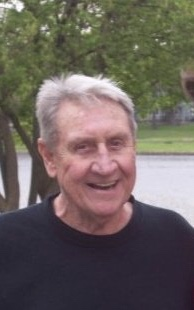 John Joseph "Flip" Vail, 88, cherished husband, father, Papa and friend, passed away Monday, November 26, 2018 , peacefully at home. Flip grew up on Button Street in Auburn, New York, and often fondly spoke of the 6thWard, his wonderful parents and Holy Family School and the lifetime friendships he made there, where he was affectionately known as Jackie or Johnny. He began his successful career as a machinist at ALCO, and proudly carried his profession into owning his own company serving the manufacturing industry as a manufacturer's representative. He continued throughout his career supporting, encouraging and mentoring many small business owners in tooling and other trades. Much can be remembered about Flip's life and background, but his life truly centered around his family and friends. Flip and his wife Marie raised their family in Auburn and surrounded them with love and fun. While they travelled the world, he most enjoyed his time at their Mary Street home, on Longboat Key, Florida, or at the lake. He created a home for so many at the lake that was filled with great love, great friendship, great food and great fun. All were welcome, and all came. Some for dinner and some for days. Everyone was family at the Vails. Days on the boat and nights on the deck brought great joy to him and Marie, as did his daily swims in the lake from the time the ice broke in the spring until the winter came. The Vail camp was always Flip and Marie's favorite place to be and they shared their love of Owasco Lake with so many. The Vail camp, Christmas Eve's on Mary Street, Sunday dinners at Nana and Papa's and the Vail Tool softball teams will always be remembered, along with many other beautiful gatherings. Flip was known for his generosity and kindness throughout the community. While often quiet acts of kindness, he promoted so many charities and was a constant supporter of the Auburn community and all that if offered. He was a lifetime member of the Elks Lodge #474 as well as the Knights of Columbus Council #207. His love of the YMCA was known to all. He joined the YMCA as a young man, and forged many, many friendships on the paddleball, handball and racquetball courts and in the pool. The 5:00 a.m. pool group was famous throughout the town and brought him much joy. If you swam in the pool you were guaranteed to hear endless stories about his children and how proud he was of them, of his beautiful Marie, stories that made you laugh, and always ideas for your future and how he can help, all while treading water. He will fondly be remembered for being a wonderful story teller and the laughter his stories brought. Flip also shared a great love of animals with his children and welcomed so many dogs and cats into his loving home and gave them the best lives ever. Flip was well known for his thoughtful notes and letters, which he sent to those he cared for as well as those he may not have known but just wanted to show kindness, support or commend. It was a gift to be on one of his mailing lists or to receive a handwritten note from him. He wrote his children, often daily, whether they lived with him, down the street, or many miles away. He left his grandchildren with boxes of letters sharing his love, praise and thoughts for their futures that they will forever hold dear. Flip is survived by his children, Mark Vail, Susan Vail Lynch, Patricia Vail Dellonte and Christopher Hoey, who will forever miss him, and his brother Joseph Vail, whom always showed great kindness to him. He also leaves behind his beautiful grandchildren whom he so adored and was proud of, Kate Vail Dellonte, Mitchell Hoey, Brittany Marie Lynch, Carly Vail Hepburn and her husband Adam, Molly Marie Lynch, Laura Marie Vail and Jessica Marie Vail. In addition, he leaves his beautiful great-grandchildren, the twins who arrived just last month and whom he joyously spent his final days with, Henry John Hepburn and Penelope Marie Hepburn, as well as Madeline and Mason Vail whom while lived far away were always in his heart. He was predeceased by his beloved wife, Marie Assunta Palmeri Vail, whom he worshiped and adored and loved beyond words, his loving parents, Joseph and Mary Muldoon Vail, his brother Robert Vail, his in-laws, Frank and Irene Palmeri, and many, many dear friends - all who will rejoice upon his arrival in Heaven. Flip served proudly in the Korean War in both the Navy and the Coast Guard. He will be buried with full military honors. There will be no calling hours. A Mass of Christian Burial will be Saturday, December 1stat 10:30 a.m. at Sacred Heart Church, Auburn, New York. Burial will be in St. Joseph's Cemetery. In lieu of flowers, contributions in Flip's memory may be made to the Loretto Foundation Memory Care project, 700 E. Brighton Avenue, Syracuse, NY, 13205, or via lorettocny.org. Langham Funeral Home is handling arrangements. The family thanks their friends from the bottom of their hearts, who had huge love for Flip and who Flip and Marie considered to be their own, and all the wonderful people that entered their lives to support him along the way. Flip leaves this world a better place. To know him was to love him. Continue to share wonderful stories of Flip and Marie, continue to love greatly, and take the time to share a note of love in the mail with someone.

Share Your Memory of
John
Upload Your Memory View All Memories
Be the first to upload a memory!
Share A Memory