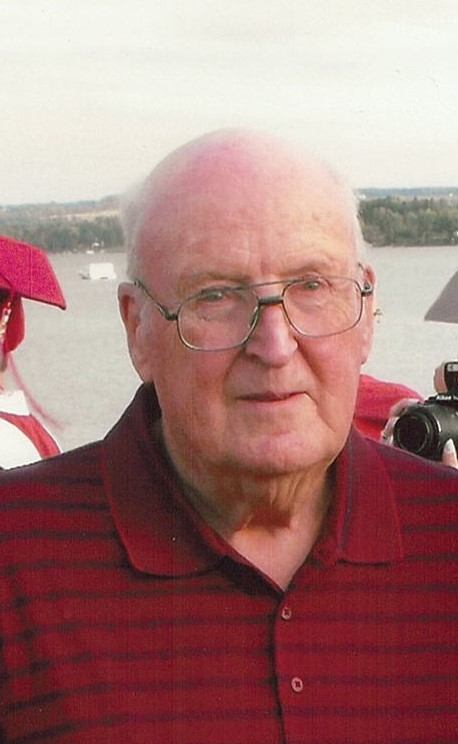 Please share a memory of George to include in a keepsake book for family and friends.
View Tribute Book
GEORGE Edward Tehan January 9, 1931 – March 15, 2021 George E. Tehan passed away peacefully at home on March 15, 2021, surrounded by his loving family. Born in Auburn, NY to William H Tehan, II and Georgia Corning Tehan, he grew up on Beach Ave. George established lifelong friendships with Harold Casper and James Walsh, each of whom would go on to be his brothers in-law as they each married a Krumm sister. George attended Auburn East High School, running Track, graduating in 1948. Following High School, he served in the United States Navy from 1950 – 1954, during the Korean Conflict. He was assigned to the Communications Ship, USS Adirondack (AGC-15) as a Lithographer, LI3, stationed at NATO Maritime Command in Naples, Italy. Upon returning to Auburn, George joined his father in the family business, Tehan Insurance (eventually Cayuga Agency), which he owned and operated with his wife until their retirement in 1993. George loved spending time with his family and friends; enjoyed skiing, golfing, sailing, tending to his lawn, traveling, telling a good joke and was fond of ice cream! He was a long-time member of the Knights of Columbus, Ancient Order of the Hibernians, Owasco Country Club, Highland Park Golf Club, and SK Post. He and his wife were also founding members of the Finger Lake Ski Club. George had a philanthropic heart and supported many organizations, especially those for children. Big George, as he is affectionately referred to by his family, will be deeply missed but his family will remember all the life lessons he imparted to them. He will be dearly missed. George is survived by his children: Elizabeth (Thomas) O'Donnell, Patricia (Guy) Miller, Andrew (Nancy) Tehan, Catherine Tehan, David (Karen) Tehan, grandchildren: Clare and Thomas O'Donnell, David and Emma Miller, George, John and Matthew Tehan and Patrick, Maire, and Rachel Tehan; his sisters Nancy Morgan and Barbara O'Brien, sister in-law Agnes (Sparky) Casper and many nieces and nephews. He was preceded in death by his wife Marilyn Tehan, infant son Gerard Tehan, his parents, longtime companion Polly Hutchinson, siblings William Tehan III, Mary Hopko, and Lillian Miller, and in-laws Harold Casper, James and Patricia Walsh, Serge Hopko, Wallace Miler, Patrick O'Brien Joseph Morgan, Mabel and Andrew Krumm. In addition to excellent medical care given by Dr. Keenan and the Veterans Affairs, the family extends their greatest appreciation for the outstanding and compassionate healthcare given by home healthcare aids Christine Hamersley, Michelle Foley, Dave Gibson, Jeanne Hardy, Cindy Matthews, Klaire Woodsworth and Jennifer Stuart. Visitation will be Saturday March 20 from 10am-1045am at Sacred Heart Church followed by a Mass at 11am. Required covid guidelines and restrictions will implemented. Burial will be in St. Joseph's Cemetery. Omission of flowers is requested. Charitable donations may be made to Play Space ABC Cayuga, 63 Genesee St., Auburn, NY 13021. In remembrance of George's life, the family requests omission of flowers and any charitable donations be made to Play Space, ABC Cayuga Inc., 63 Genesee St Suite 1, Auburn, NY 13021. Please visit www.Langhamfuneralhomellc.com to leave a condolence for the family
To send flowers to the family or plant a tree in memory of George Tehan, please visit Tribute Store

Look inside to read what others have shared
Family and friends are coming together online to create a special keepsake. Every memory left on the online obituary will be automatically included in this book.
View Tribute Book
Services for George Tehan
There are no events scheduled. You can still show your support by sending flowers directly to the family, or planting a memorial tree in memory of George Tehan.
Visit the Tribute Store