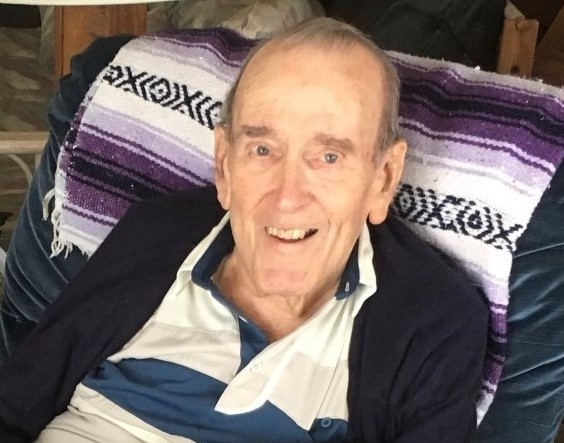 Please share a memory of Joseph to include in a keepsake book for family and friends.
View Tribute Book

Joseph Francis Rowley, MD, 94, passed away peacefully in Ithaca, NY, on October 12, 2021 after a brief illness.

Joe was born in Utica, NY, and spent his early years in both Utica and Fall River, MA. He joined the U.S. Navy in 1943 while at the College of the Holy Cross in Worcester, MA and graduated from Albany Medical College in 1951. Following a year as a naval medical officer in Guam during the Korean War, he was living in St. Louis when he met his wife, Josephine "Angela" Mannas, in 1955. They married a year later, and in 1957 the couple moved to Auburn, New York, where they would raise eight children, all of whom graduated from Blessed Trinity School and Auburn High School. Angela and Joe were parishioners of St. Alphonsus Church for more than 50 years. They were married for 63 years until Angela's passing in 2019.

Joe's own father passed away when he was 16 and he became responsible for his mother, her two sisters, and his four siblings. It was a caretaker role thrust upon him, but he was a natural fit. Joe began practicing internal medicine in Auburn in 1957, and in 1975, along with Drs. Lawrence Smith and William Chaffee, he established Internal Medicine Associates of Auburn. No matter the time of day or night, he always wore a tie and jacket when caring for his patients—a sign of respect. He felt it was a privilege to practice medicine and loved being a part of the medical community in Auburn. Many of his children can recall waiting for him in the family car while he was out on house calls, a service he performed throughout his career. He was proud that three of his children and two grandchildren also became physicians—due in no small part to his influence. In 1985, he became medical director for Auburn Memorial Hospital (AMH) and reveled in the opportunity to learn new skills and help guide the hospital through challenging times.

Joe had a big personality with a tremendous sense of humor. He was quick witted, self-deprecating, and laughed easily. He had many sayings and jokes that his family heard ad nauseum (a term he used frequently). He held (and shared) opinions about almost everything—which he readily acknowledged was a blessing and a curse. He had a great intellect and a curious nature, and was eager to learn new things, whether he was taking an adult photography class at Cayuga Community College or going to painting classes with his wife after his retirement. He was the catalyst for the backyard ice rink and could be found on many winter nights flooding the yard with the hose. Together, he and Angela were prolific in canning any and all types of fruit and vegetables, and he planted a tree or bush in the yard every Mother's Day as a reminder of the life she brought into the world. He loved to take photos, particularly of landscapes, which Angela would often paint. He recently had started making pottery and giving his finished products to his offspring. A voracious reader of fiction and consumer of news, Joe read books on his Kindle until his final days and finished a crossword puzzle daily for most of the past 20 years.

The summer home built in 1966 for Angela on Owasco Lake is a special place for the entire family and continues to hold an outsized place in everyone's heart. He loved spending time there with Angela and the family. In later years, Angela and Joe opted against spending winters in Florida and instead chose Queensbury, NY as their winter home to be closer to the family. For 16 years, countless large gatherings were held in Queensbury celebrating the holidays and each other. Joe and Angela's constant companionship and his unflagging support for her until her passing were a model for all his children and one of his proudest accomplishments. After her death, he moved to Ithaca, living first in the Longview Assisted Living program and then with his son John and daughter-in-law Jean. His last year was spent at home with them, where he enjoyed frequent visits from his extended family. At last, he was no longer required to be the caretaker.

Joe was predeceased by his parents, Joseph F. and Alice McBride Rowley, as well as his sisters Ellen Welsh, Alice Ann Ellinwood, and Isabel McDonough, as well as his brother Charles "Mac" Rowley. Joe is survived by a large extended family. His eight children are Stephen (Anne), Joseph, John (Jean), Mary (Steven) Campbell, Michele (Kevin) Lipe, Patrick (Caroline), Christopher (Jennifer), and Thomas. He and Angela have 18 grandchildren and many grandchildren in-laws, 5 great grandchildren, and many nieces and nephews.

Calling hours with Langham's Funeral Home will be held from 11:45—12:30 PM on 10/23/21 at St. Alphonsus Church in Auburn, New York with a funeral mass immediately following at 12:45 PM. In lieu of flowers, the family kindly requests any memorial donations be made to Auburn Community Hospital at auburnhospital.org. Mailed donations can be sent to ACH Foundation, 17 Lansing St, Auburn NY 13021.

To send flowers to the family or plant a tree in memory of Joseph Rowley, please visit Tribute Store

Look inside to read what others have shared
Family and friends are coming together online to create a special keepsake. Every memory left on the online obituary will be automatically included in this book.
View Tribute Book
Services for Joseph Rowley
There are no events scheduled. You can still show your support by sending flowers directly to the family, or planting a memorial tree in memory of Joseph Rowley.
Visit the Tribute Store

Share Your Memory of
Joseph
Upload Your Memory View All Memories
Be the first to upload a memory!
Share A Memory
Send Flowers
Plant a Tree