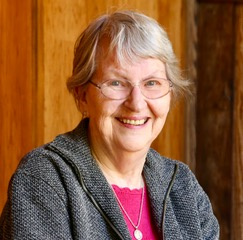 Laura Wood Conley, 97, of Auburn died peacefully at home with her family around her. She was the daughter of George Taber and Lulu Pearl Wood. Laura was born in Weedsport NY in 1925, but grew up in the village of Aurora NY, where her working career began as a babysitter and by delivering the Citizen newspaper in Aurora. She moved to Auburn in 1953 where she raised her family. Laura graduated from the Cayuga Lake Academy in Aurora New York with a degree in business and from Auburn Business School with an Executive Secretarial Degree. She worked as a secretary in Santa Barbara California for a number of years before returning home to Central New York. She worked at Cowles Company, Cayuga New York as a bookkeeper for many years before becoming the bookkeeper for her husband's sign business William M. Conley Signs in Auburn New York for 21 years. In addition to that, she sold Avon, Tupperware, Fuller Brush and Parents Magazine, and was a Notary Public in between doing the bookkeeping and raising her four children. Laura met and married the handsome and humorous William M. Conley of Union Springs In 1950, he predeceased her in 1991, after 41 years together. She was also actively involved as President of the Parent Teachers Association, was a member of the Order of the Eastern Star, and volunteered for the United Fund and First Presbyterian Church. She sang in the choir since she was 10 years old, played in the bell choir, and was a former deacon at First Presbyterian Church, as well as a Sunday school teacher. Additionally, she was on the board of directors at the Faatz-Crofut Home for the Elderly for over 20 years and often played piano for the residents, where she enjoyed sharing her love of music with them. She was a Girl Scout leader for over 10 years, where she enjoyed camping out with her troop and having singalongs around the campfire. While music was certainly her passion, Laura also enjoyed knitting, swimming, ice skating on Cayuga Lake, and doing craft projects (she was part of a home bureau group for many years). She also loved to write poetry and her poems were published in Savor the Memories, an anthology by Boyle Senior Center Writers. She shared her love of writing by volunteering to work with grade school children and so enjoyed mentoring them. Laura had a warm inviting smile and a gift to meet new people wherever she traveled to, making new friends around the world. Language differences never were a barrier. She is survived by her four children, Marcia Rambaud and her husband Joseph of Reno, NV; Brian Conley and his wife Kay of Winterville, NC; Susan Conley LaGow and her husband Andrew of Loma Mar, CA; and Laurie Connors and her husband Kevin of Leverett, MA. She is also survived by her sister-in-law Linda Wood of Rochester NY and seven grandchildren, Michael Bertolli, Marisa Bertolli, Sean Conley, Steven Conley, Trevor Connors, Alison Connors Pratt, and Joshua LaGow, and eight great grandchildren, Carter and Everett Conley, Anna, Abigail, and Wyatt Conley, Valentina and Serafina Bertolli, and Oceana Pratt, nieces and nephews Del, Steve, Dan, and Jim Wood; Dawn Wagner, Linda Murphy, Scott Wagner, Joan Newell and Sandy Lollman; Ed Hickey; Donald Wood, and many cousins. Mom was blessed to have many dear friends that meant the world to her. How wonderful to have lived such a full rich life, taking the journey with close family and friends. Rest In Peace now mom and remember your love lives on in all of us who you touched. In addition to her parents and her husband William, Laura was predeceased by her brothers Smith Dexter Wood and Roswell Franklin Wood, and her sisters Jean Debo, Louise Wagner, and Alice Hickey, Alice's son Stephen Hickey and her granddaughter Taylor LaGow. The family wishes to express their sincere thanks to all the wonderful staff at The Faatz-Crofut Home where she resided recently. Their exceptional care, love, and compassion was so appreciated. We would also like to express our appreciation to the Hospice of the Finger Lakes for making it possible for our mother to move back to her home of 69 years, her deepest wish, surrounded by a lifetime of memories, her husband's murals, with her children and with dignity, compassion, tenderness, and respect. Additionally, we are so grateful toDr. Agno and Dr. Bennett for their dedication to our mother's care. Friends are invited to memorial services at 2:00pm Friday June 24 in First Presbyterian Church, Auburn. The Rev. James Moore will officiate. Burial will be private in Oak Glen Cemetery, Aurora. Expressions of sympathy may be made in Laura's memory to the The Faatz-Crofut Home, The Matthew House, the First Presbyterian Church in Auburn, or Hospice of the Finger Lakes, all places dear to her. We ask please no flowers. Funeral Arrangements provided by Langham Funeral Home. Please visit www.Langhamfuneralhomellc.com to leave a condolence.
To send flowers to the family or plant a tree in memory of Laura Conley, please visit Tribute Store

A Memorial Tree was planted for Laura
We are deeply sorry for your loss ~ the staff at Langham Funeral Home
Join in honoring their life - plant a memorial tree
Services for Laura Conley
There are no events scheduled. You can still show your support by sending flowers directly to the family, or planting a memorial tree in memory of Laura Conley.
Visit the Tribute Store

Share Your Memory of
Laura
Upload Your Memory View All Memories
Be the first to upload a memory!
Share A Memory
Send Flowers
Plant a Tree