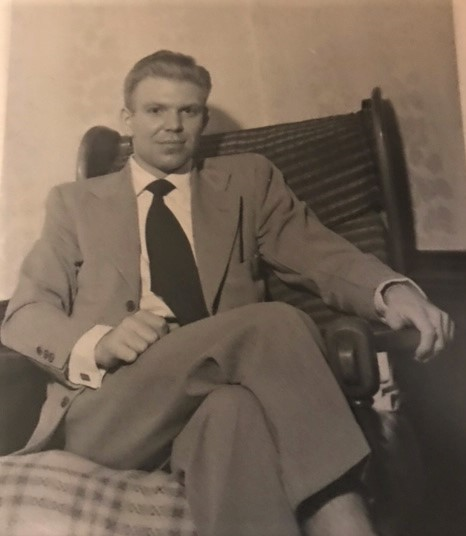 Please share a memory of Gerald to include in a keepsake book for family and friends.
View Tribute Book

Gerald Vernon Turk, 93, of Sennett, passed away at his home on May 16, 2022 with his loving family by his side. Gerald was born in Spencer, NY and was the son of the late Ernest and Vera Crandall Turk. Enlisted in the US Army, PFC Gerald V. Turk proudly served his Country during WW II and was stationed in Korea as a heavy machine gunner.

He was a 1949 West High School graduate and retired from Alco Engines where he was employed as a machinist in the union for 20 years, and then later promoted working in industrial engineering and quality control for the remaining 35 years.

He married the love of his life, Althea Crook Turk, on April 18, 1953, and together they raised eight children. Gerald was an only child and always said that God had a great sense of humor by giving him eight children.

Gerald traveled extensively in the United States and Canada and one of his favorite trips was with three of his children to The United Kingdom. He enjoyed golfing, coin and stamp collecting and had a passion for history and story-telling. He loved his family more than anything and wanted to be together with all of them any chance he had.

Family will greet friends from 12:30-1:30pm on Monday, May 23 at Willard Chapel with a memorial service to follow at 1:30pm. A private family burial with military honors will be held in Soule Cemetery.

Please visit www.Langhamfuneralhomellc.com to leave a condolence for the family.

To send flowers to the family or plant a tree in memory of Gerald Turk, please visit Tribute Store

Look inside to read what others have shared
Family and friends are coming together online to create a special keepsake. Every memory left on the online obituary will be automatically included in this book.
View Tribute Book
Services for Gerald Turk
There are no events scheduled. You can still show your support by sending flowers directly to the family, or planting a memorial tree in memory of Gerald Turk.
Visit the Tribute Store

Share Your Memory of
Gerald
Upload Your Memory View All Memories
Be the first to upload a memory!
Share A Memory
Send Flowers
Plant a Tree