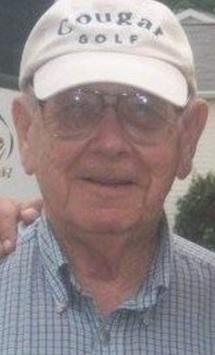 Robert M. Spalding, "Rebel", 85, of 23 North Park, Auburn, passed away Tuesday, April 14, 2015 at St. Joseph's Hospital, Syracuse. Born and raised in Lebanon, Kentucky, he was the son of the late Lee Ray and Ruby Penick Spalding. Robert retired from Cayuga County Highway Department after 47 years of employment. He was an avid golfer and was a member of Pearl Lakes Golf Course. He is survived by his wife, Jean D'Agostino Spalding, who on April 21 would have celebrated their 59th wedding anniversary together; a daughter, Michelle (Bob) Field of Sennett; a son, Richard (Shannon) Spalding of Homer; three brothers, Buford Ralph Spalding, Frank Spalding and Wesley Clem Spalding; two sisters, Nelda Crews and Carol Dodge; five grandchildren, Jessica and Isabella Field, Ryan, Sean and Molly Spalding; a sister-in-law Ann D'Agostino and by several nieces nephews and cousins. In addition to his parents he was predeceased by a brother Irving Boyd Spalding. Calling hours will be Sunday, April 19 from 1-3PM at Langham Funeral Home, LLC, followed by a funeral service at 3PM at the funeral home. In lieu of flowers, contributions may be made to St. Jude Children's Research Hospital in memory of Robert. To leave a condolence for the family visit www.Langhamfuneralhomellc.com.