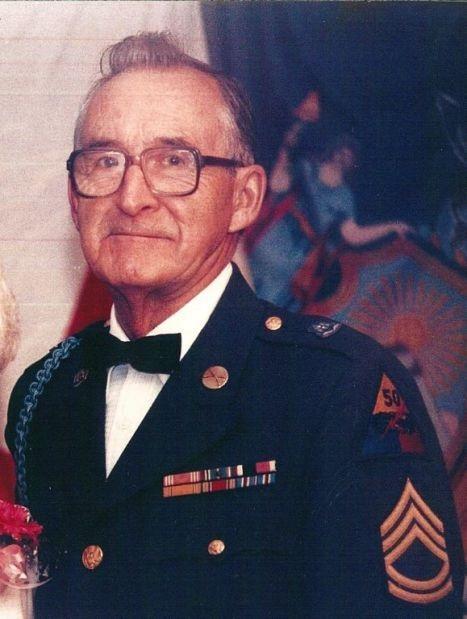 Charles M. Odell, 101, formerly of Melrose Rd., passed away Tuesday, April 14, 2015 at Finger Lakes Center for Living. Born in Auburn, he was the son of the late Charles and Edna Treat Odell. He was a graduate of Auburn High School and served in the Army in WWII and served 24 years in the National Guard, retiring in 1974. Charles was recently honored for being the oldest living WWII veteran in the Town of Owasco. He was employed with the former Firth Carpet and retired from NYS Electric & Gas in 1985. He was an active member of the former Calvary Presbyterian Church. Charles enjoyed spending time with his family, especially attending many of his grandchildren's events. He is survived by his children, Marilyn (James) Warner of Cato, Shirley (Lee) Hill of Auburn, Charlene (Carl) Grazul of Auburn and Phil (Sandy) Odell of Auburn; 9 grandchildren, Mark, Jennifer, Trevor, Sarah, Joshua, Julie, Carrie, Steven and Brad and 16 great-grandchildren, with another one on the way; one niece, June Rose of Auburn, and one nephew, Claire Morse of Union Springs. In addition to his parents, Charles was predeceased by his wife Lois Lowery Odell in 2003, a brother, Dewitt Odell, sisters Elma LaBerteaux and Verna Morse and sister-in-law Dorris Odell. The family wish a heartfelt thanks to the staff at the Finger Lakes Center for the Living for the wonderful care they gave Charles. Calling hours will be Monday April 20 from 11:00-1:00pm at Langham Funeral Home, LLC followed by a service at 1pm at the funeral home. Burial with military honors will be in Soule Cemetery, Sennett. Contributions may be made in memory of Charles to the Finger Lakes Center for the Living. To leave a condolence for the family please visit www.Langhamfuneralhomellc.com

Share Your Memory of
Charles
Upload Your Memory View All Memories
Be the first to upload a memory!